Working closely with Thomas Sinden Limited, Bower Fuller reconfigured and refurbished the electrical and mechanical services to 247 mixed units of studios with kitchen facilities and 4/6 bedroom flats with a central kitchen in each flat.

The 14 week fast track refurbishment of this scheme provides purpose built student accommodation in the centre of London for a number of London’s universities such as City, UCL, Kings College and Imperial College.

The project provided new LED energy efficient lighting throughout, new kitchen facilities in the flats, and an overhaul of the podded shower rooms to enhance the modern and well-equipped high standard set out when the building was first constructed.

A mock-up of a typical room layout was initially undertaken to understand the full implications and period with a view to assisting the overall programming of the project. Over 2000 energy efficient luminaires were replaced and a further 2500 face and switch plates throughout the eight floors have been rewired. 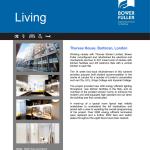