The Mond Building is a Grade II listed building located on the New Museums site of the University of Cambridge.

The art deco building was refurbished to provide a new home for the Centre of African Studies, including its library.

The structure and nature of the building presented challenges to the services installation, such as low ceilings and less than ideal plant space. These were overcome with careful co-ordination and close working relationships with the main contractor, Vinci.

The building is heated via 2 gas fired boilers and radiators; with hot water provided locally at the outlets. A friatherm plastic pipework system was utilised to avoid the long term corrosion problem (‘pinholeing’) experienced with copper pipework in Cambridge.

Decorative low voltage downlighters and ground mounted LED uplighters were installed within the front entrance; in addition, lighting to many of the other areas have daylight compensation control.

The building was originally designed by architect H C Huges in the 1930’s for the Russian Nobel Prize winner, Pyotr Leonidovich Kapitza, for scientific research. The design incorporated ground breaking concepts for large circulation and communal areas within a scientific research building. Kapitza envisaged that this would facilitate the cross fertilisation of ideas amongst his researchers.

Externally, there is an engraving of a crocodile by the sculptor Eric Gill, which is a visual pun referring to the nickname of the sharp tempered Lord Ernest Rutherford, Kapitza’s supervisor, who commissioned the building with funds from the Royal Society (via a bequest from Ludwig Mond). Lord Rutherford was later credited for discovering the neutron. 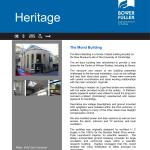