Working in and around an existing 400 pupil primary school built back in 1900 was never going to be a straightforward multi phased project. We were appointed by Morgan Sindall to develop and refurbish the Cambridge County Council school in various sections to create vibrant new spaces for learning.

As the site remained fully operational during term time, a phased approach to the works had to be adopted. A new playground at the rear of the site was created first, before we moved on to the redevelopment of the North East corner to construct a new activity hall extension. A major part of the scheme was carried out in the six week summer period including the new classrooms and early years area, with a complete refurbishment of the library and year three classrooms.

The project was both logistically and time challenging with the school remaining occupied during the works. Phased hand over of various sections required services to be maintained at all times. This necessitated an extensive survey process and close liaison with both the various construction trades and the school alike including a carefully monitored process of noisy work operations during the school breaks.

We provided all the new and refurbished areas with heating, ventilation, domestic water, lighting, power, data and fire alarm. The new services were extended and modified from the existing systems. 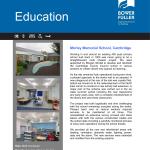