Framlingham Castle and the so called poorhouse is a grade 1 listed fortress in rural Suffolk under the auspices of English Heritage. The castle dates back to the 12th Century and boasts a rich history.  Behind the towering ramparts, it is understood that Mary Tudor was proclaimed Queen of England during the sixteenth century. In 1635, the castle was sold to Sir Robert Hitcham, a rich lawyer and philanthropist. He sadly died a year later but left instructions for a poorhouse to be built. After years of legal wrangling, the first poor families arrived in the mid-17th century settling into the Red House. Just over a hundred years later, the last poorhouse residents, and the building was used as a parish hall.  The castle was given to the Ministry of Works by Robert Hitcham’s old Cambridge College, Pembroke, in 1913 and then the castle was passed to English Heritage in 1984.

Bower Fuller provided the new mechanical and electrical services for the refurbishment of the visitor centre, which was originally the poorhouse inside the walls of the castle. The visitor centre provides a new kitchen and café, shop and an interpretation/exhibition space with disabled access. This provides a more involved and colourful visitor experience, enabling guests to uncover the castle’s many stories over the centuries.

The mechanical services include a dedicated VRF heating system serving the poorhouse via concealed ceiling and wall-mounted units all monitored through a central controller, new domestic water and drainage services for the commercial kitchen and a new flue liner through one of the existing chimney for the kitchen extract. Electrically, a new power supply was brought into the site following the route of the original cart entrance to the castle and under the bridge of the old moat. A complete electrical installation serves all the new spaces with small power, data and wifi, LED lighting, fire alarm, security, door access and disabled facilities including a new lift to access the upper levels of the exhibition space and further access to walk the castle walls and turrets.

Installation of Mechanical and Electrical services 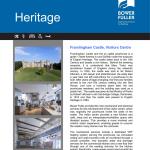