The concept of this project was to replace the existing dated school building with a new ecologically friendly building and increase the potential pupil intake capacity by 25%.

A 90kw woodchip boiler, backed up by a gas boiler, provides the heat to the underfloor heating system and boosts the temperature of the HWS which is initially heated by solar panels.

Natural ventilation is employed with control to windows dependent upon CO2 levels and outside temperatures. Harvested rainwater from an underground storage tank is used in the WC’s.

The school also benefits from a BMS system linked to a graphic display in the reception area which shows the energy produced by the sustainable systems.

Installation of Mechanical and Electrical Contractor 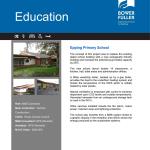