Bower Fuller has recently completed all 3 phases of this project, developing the Derwent Centre at Princess Alexandra Hospital, Harlow.

The project comprised part refurbishment and part new build of the mental health facility within the hospital. The refurbished areas are surrounded by the remaining areas of the centre which had to remain in occupation and operation throughout the project.

Due to the location of the new build area of the site, it was necessary to trace and divert the existing parallel 240mm 4 core electrical feeds on a multi phased basis, thus enabling the new build work to take place. This also necessitated the installation of temporary load and standby generators which had to be completed within single 8 hour periods and also while ensuring the facility remained fully operational. 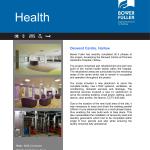