Bower Fuller has continued its working relationship with Thomas Sinden by carrying out the full mechanical, electrical and plumbing works in the QEII Centre for the children’s charity, Coram.

The building, which was officially opened by Her Majesty the Queen on the 5th December 2018 is dedicated to the promotion of children’s rights and best practice, and the opening coincides with the celebrations to mark the 350th anniversary of Thomas Coram’s birth, the charity’s founder.

The new building comprises both office space on the 1st and 2nd floor, and also a lecture theatre and seminar rooms on the ground floor. Due to the use and anticipated occupancy levels of these areas, the provision of enhanced ventilation and the associated acoustic requirements were critical to the overall successful operating performance of the building.

The mechanical services installation boasts new central roof mounted plant, including a new air handling unit and new boiler house, new boilers, a cold water booster set and cold water storage tank. Due to the limited space within the plant area, the coordination of the services was extremely tight and needed to be carefully considered.

The building also possesses a dedicated reading room. As this area stores historic papers, it benefits from a humidity-controlled environment.

Bower Fuller also worked closely with the client’s IT team to deliver their state-of-the-art audio-visual installation. 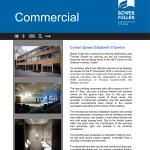