Following on from the completion of the refurbishment works of Toynbee Hall on the same site, Bower Fuller was appointed by main contractor Thomas Sinden to carry out all mechanical, electrical and plumbing works at 28 Commercial Street.

The new building comprises office space located over 6 floors, with a main central core including WC’s and smoke extract system.

The project involved meticulous coordination of the new services with the building structure due to all the services being visible, apart from the WC’s and the central cores where ceilings were present.

A full “Computational Fluid Dynamics” of the smoke extract system was carried during the design stage of the project, thus ensuring that the proposed extract system would function correctly.

The electrical services include new surface mounted “organic response” luminaires with integral smart wireless control, new small power throughout, fire alarm, disabled services and a security system. Located on the roof, we installed a new 10kW photovoltaic system which contributed to the renewable energy source for the building. 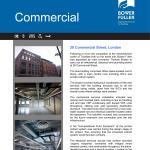